There are multiple forms of quotation marks, each suited to a particular context. We will study in detail their characteristics and the simplest ways to use them well. After our first overview on apostrophes, let us look at quotation marks. Both are also often confused, but the case of quotes is still special and deserves to be discussed in a separate article.

Here again, using the right quotation marks instead of the bad ones will not revolutionize your communication, but it will give it more elegance and refinement, and will play in your favor in terms of image. Judge for yourself.

Everything starts in the same way as for apostrophes: key “Quotes” that is available on our computer keyboard call typewrighter quotes by default. They are only intended for technical uses: Gross typing or computer development.

In terms of formatted text, the objective is to use real quotes: they are called typographic quotes. Their design is more sophisticated, they integrate into the rhythm of typography instead of breaking it as do the “fake” quotation marks.

To each language its type of quotes

Yes, but... it turns out that each language uses a different quote system. Some will use double angle quotes, others single curved quotes, sometimes in high position, sometimes in low position...

So we must begin by knowing what one seeks: the language of the text you set determines the form of quotes that you should use. Some examples are given below, but for completeness I recommend the Wikipedia page from which I took those informations. 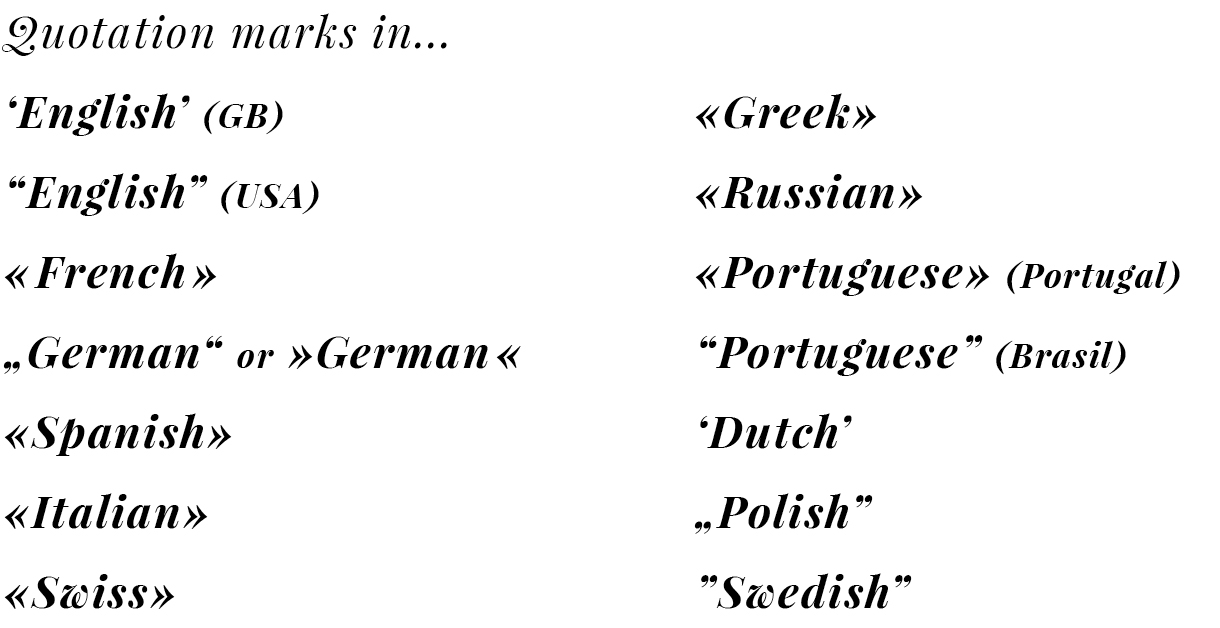 You saw, sometimes typographic apostrophe can be used as a quote. That is to say that the same sign is coded only once (U+2019) but is used to transmit different informations (apostrophe, right quotation mark, sometimes even left quotation mark). This is why software preferences manage apostrophes and quotation marks issues with the same parameter.

How to use the right quotes

So you must know the system used in the language of the text you are composing. Most of the times it will be your tongue, and therefore the default language on your computer. Then it only remains to call the right quotes, and drive out default typewrighter quotes.

How to do? As in the case of the apostrophe, there are several methods depending on the context. Sometimes this is done automatically, sometimes not. I’ll make it short this time.

2. Enter directly the right quotes with the right shortcuts:

3. Find-replace all typewrighter quotes into typo quotes (careful it must be done in two stages to distinguish between right and left quotes).

4. On your web pages, you must favor Unicode (UTF 8 or 16), and integrate the right quotes in the source text.
If you still use ISO 8859-1 encoding, you will additionally turn the quotes in the corresponding html entities (see here)... except for the double angle quotes «» that are already present in this encoding.

How to use nonstandard quotes

If you’re setting a text in language other than yours, and want to to use other types of quotes, you can do it by parametring InDesign preferences.

Go to Preferences> Dictionary. Do not touch the "Language" parameter, which concerns spelling, but rather look at the "Double quote" parameter. It defines whereby InDesign will replace the keyboard key " (if you have checked “Use typographic quotes” in the “Text” preferences category). Change the setting ... and you have the quotes you want.

Warning, do not change the "Single quote" parameter because if you change this quotation mark, for example from ’ to ›, also all your typographic apostrophes will be converted to › (for the reason I’ve mentioned above ). This would make little sense...

Voilà! you know all about the quotes now.
The "false", the “good” and the «others»!